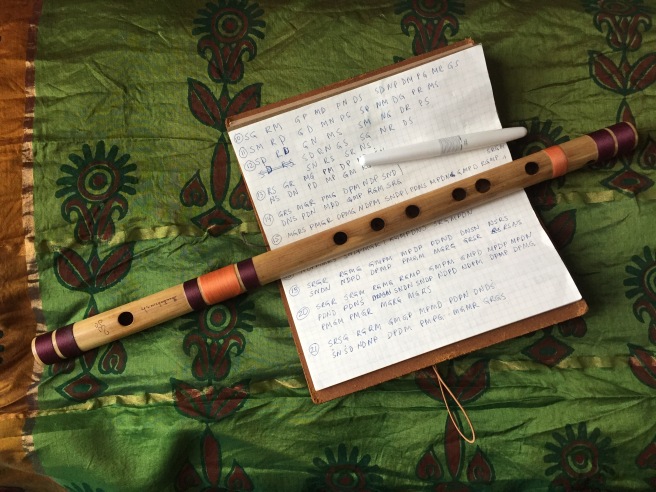 It’s that time of year again when we do summaries and New Year’s resolutions. This year some predictable progress has been made both on dyss and on eggs – my first experiments with natural dyes were interesting, you can see a few posts about them here: https://goldenwomb.wordpress.com. Music is where things took quite an unexpected (even for me, or, perhaps, especially for me) turn.

Here’s what happened. In our by now annual arts camp in Canajoharie this year I was planning to take it easier and was hoping to get some writing also done on the side. So I signed up for two of Ranjan’s classes – vocal and harmonium, and thought that was going to be it. But then, sometime towards the end of the first week I happened to witness Shakthi, the flute teacher, jamming with a couple of his advanced students, and it sounded so good, that I felt for the first time in my life: I’ve got to try this flute thing, don’t know why and what for, but I’ve got to give it a chance. So I did, and it filled up of my music-allocated time plus some more :).

Here is Shakthi playing in a concert in Dallas two summers ago, I was very lucky to have been there, it was the last concert of the tour and turned out absolutely amazing:

So, I’ve been practicing for 4 months now, still at the stage of playing “scales” and exercises, which would be quite boring, I must say, if something else was not also happening at the same time. I sit there in our meditation room (we have a meditation room), playing notes for an hour or so, and that simple and otherwise boring “work-out” not only settles me completely into myself, and washes away many of the superficial concerns, but also manages to dig under and turn over some rocks here and there that I didn’t even know I was carrying. That’s pretty powerful, and even though I have heard about this before, it’s very different when you actually experience it yourself.

They say flute is the closest there is to singing (though, I’ve heard that said about sarangi also), but it feels extremely different to me, at least at this beginner stage. While in using voice you are out there fully exposed, I find that flute gives you some distance, the sound, perhaps because of being mediated by the instrument, is heard as if from a side, and it’s true, you hear it in a very different way than you hear your own voice. For me that is a very different experience, both interesting and empowering in a very new way.

So, it seems, next year will be dedicated to flute experiments, and otherwise my work schedule in the first few months will be brutal, but there there will be two weeks of India in the second half of February, just to make the brutality of work bearable, and then we will see what the summer brings.